← more from
Third Man Records
Get fresh music recommendations delivered to your inbox every Friday. 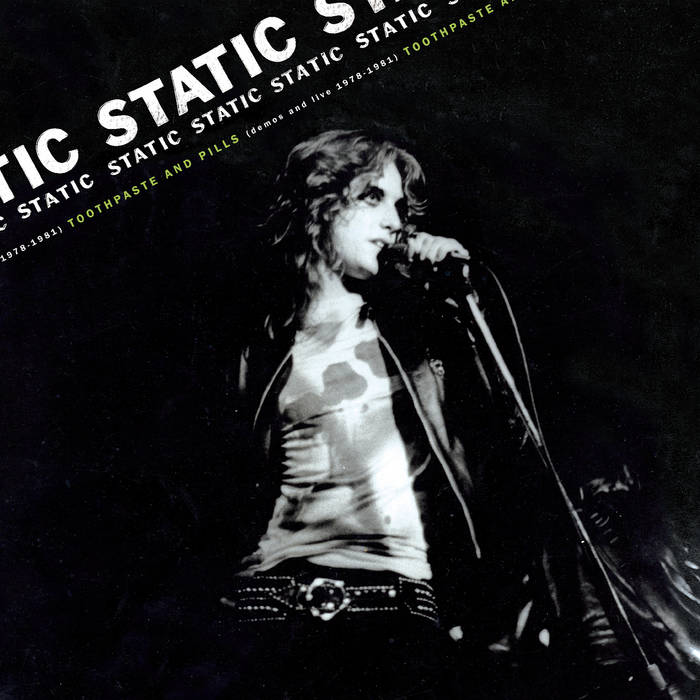 Long before John Brannon of Negative Approach cemented himself as a USHC icon, you would hear rumblings about his pre-NA glam group, STATIC. Only a handful of people were lucky/brave enough to see them live. Scenesters spoke of a tape but never seemed to have one. Their most well-remembered song, "Toothpaste and Pills," allegedly featured smashing beer bottles against John’s mom’s basement wall as a percussion instrument. Could this be real?

Fast forward to 2020 and a few months into the covid-19 lockdown, Brannon came across a bunch of tapes he dug out of a box in his Mom’s closet - STATIC DEMOS ‘78, STATIC LIVE AT GROSSE POINTE SOUTH H.S., STATIC LIVE AT PLEWA HALL. Holy shit! The legend is true! And best of all, STATIC rule!

John Brannon grew up in Grosse Pointe Park just a few blocks from the Detroit border. John was always into music, but as soon as he heard T-Rex, The Stooges and Alice Cooper, he was obsessed (and still is). He had to start a band to channel his obsessions. So, John and fellow neighborhood kid, Billy Daniels, started writing songs and jamming in John’s mom’s basement. John sang and played piano. Billy played guitar and sang too. They enlisted the help of a local drummer known simply as “Red”, and STATIC was born.

During the first year that they recorded demos at Mrs. Brannon’s, they bought a bunch of beer and invited all the kids over to drink and go nuts as STATIC would run through their hits like "Toothpaste and Pills," "Punk Nation" and "We’re So Cheap We’re Divine." Mrs. Brannon finally had enough and kicked them outta the basement and forced them to get a space they could call their own. They added Mike Neal on bass and started doing proper gigs at Plewa Hall (STATIC HQ) and at legendary Detroit and Windsor (just across the river in Canada) punk rock clubs like Nunzio’s, Bookies and Coronation Tavern. Their talent show performance at Grosse Pointe South High School in 1979 ended with the plug being pulled, the cops being called and a riot of rowdy kids. Amazingly, this is documented on the album under ‘’H.S. Riot”.

After the talent show, Red left and in stepped a new drummer named Dana. Dana, Mike, Billy and Brannon, going by Static Electric, continued to play until the last STATIC show at Coronation Tavern in the summer of 1981. By this time, Brannon had seen Black Flag and Necros and knew he had to do something new. A few short months after the last STATIC show, Brannon was back on stage with his head freshly shaved, fronting his new group Negative Approach.

Before Negative Approach changed the face of punk and hardcore, before Laughing Hyenas scared the world silly and blew everyone else off the stage and before Easy Action started melting minds all over the world, there was STATIC. STATIC was real. STATIC was real as shit.

Third Man Records is beyond ecstatic to be providing this long-missing piece of the American Underground Music puzzle. We worked closely with John Brannon and Warren Defever, one of Third Man Mastering’s resident wizards, to put together this essential collection of demos and live recordings.

Bandcamp Daily  your guide to the world of Bandcamp

Nightmares on Wax and Bremer McCoy stop by with their sublime new LPs.